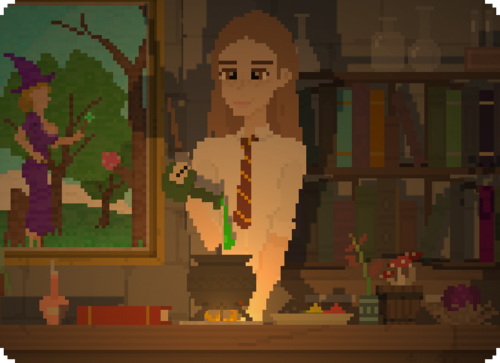 In the potion room, an over-ambitious student witch experiments with some prohibited potions, which to her dismay, seem to have some very lewd effects. The player will have to consult books, experiment with a variety of ingredients and ultimately bear witness to the effects of their concoctions first hand.
The game is based on the Harry Potter world, and should be familiar to anyone who has seen/read/played anything from the series. The game is fully animated (no 2-frame animations), largely by hand, and is my effort at bringing high quality to the H-game world. New content updates will come out weekly, so stay tuned.
Longer term, much of the animation, art and coding for this game will feed into a larger, open-ended game. It will follow our Witch from starting at a wizarding school and slowly being corrupted in this school of magic. I expect version 1 of this larger project to release in a month or two.​