Decades ago, an Estate was attacked by Servants of an unknown Master. Their only goal seemed to be the deaths of everyone on the grounds. There were no survivors. Our protagonist Master had been kept away from the destruction by his uncle, who raised him. With no one left alive to explain why he had to grow up an orphan, he returns home with a single Servant – his childhood friend – seeking to rebuild his family Estate and take revenge on whoever tried to burn it to the ground. And hopefully build a harem of cute Maids along the way~

The bugfix version addresses a bug that locks the player from progressing after Emily’s arrival. If you have reached Viridius, you are past the point that this bug affects. The bugfix version contains no other changes.

Reworked Alice’s first scene – scene has been rewritten and has new renders.
Reworked wilds north of Ventire – it is slightly more difficult to solve but easier to navigate.
Added another treasure chest and a new secret to the wilds north of Ventire.
Added more yellow flower paths to various maps.
Added a basic spoiler-free walkthrough to the README.
Added more fast travel options.
Added three new issues of Stay Clean Quarterly magazines to various Estates.
Added some spare SCQ photos from Lothario’s personal collection to Lothario’s Estate.
Added an instance of the party Maids to the Beauregard Estate.
Added Emily’s first scene and an event triggering it, restoring cut content intended for v0.3.
Added the scenes unlocked by finding trophy 6, restoring cut content intended for v0.3.
Added Emily’s second scene and an event triggering it, restoring cut content intended for v0.4.
Added Quinn, the first optional recruitable Maid, restoring cut content intended for v0.4.
Added Willow’s first scene, restoring cut content intended for v0.4.
Added a dialogue option to Willow discussing her shadow powers.
Fixed a bug where the new items did not correctly pay silcrow after purchase.
Fixed a bug during the event explaining the war table where a transfer didn’t happen.
Fixed a bug that prevented boss music from playing at the top of Fekhacht.
Fixed a bug where it was possible to get above the transfer when leaving the trophy room.
Fixed a bug where one of Lothario’s Maids wasn’t properly polishing that wood.
Fixed Detail Brush having an incorrect icon.
Fixed certain trees in the wilds leading to Ventire displaying incorrectly.
Fixed item description on Servant’s Vim and Servant’s Vigor for accuracy.
Updated the Drowned Hold – fewer “parallel paths” and a new dungeon introduction event.
Updated several of the books in the player Estate’s library.
Updated the End of Version message and changed its location.
Updated some maps and events to accommodate future releases.
Updated Willow in the player Estate so that her scene can be repeated.
Updated the repair animation for headstones to match the scope of the destroy animation.
Updated the beds in the Edgerton Estate to allow sleeping there.
Updated several bookshelves in the Edgerton Estate to help facilitate Quinn.
Updated Melissa – she should now suggest checking on Emily after she arrives.
Updated the wilds leading to the north forest; new yellow flower paths, various other updates.
Minor enemy rebalance – enemies in the swamps should be easier to fight.
Various additional map and event updates.
Various dialogue fixes and updates. 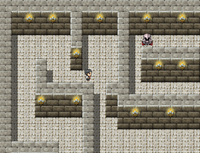