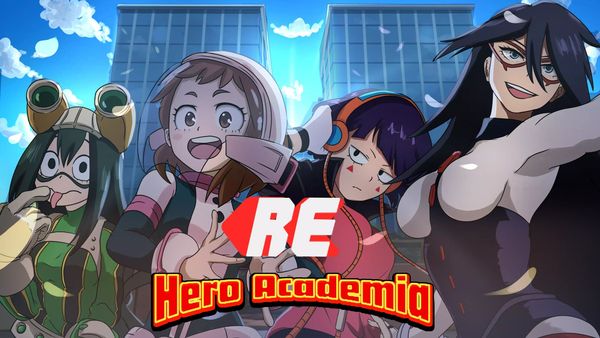 In the game, you play as a Pro Hero, a fresh graduate from U.A, who was killed in action but was saved by a mysterious Quirk and sent back in time.
Given a second chance, it’s time to hone your power, get closer to allies in order to solve the mystery of your future and try to avoid your impending doom.
You will be able to experience many lewd situations with your favorite characters along the way. Fair price for dying once, right?​

– We continue with Ochaco’s story in this update.

– The start of a new side mission, you can trigger this questline by lurking around the alleys, wearing Mei’s goggles, but only after a certain point of the story. No CG or H-scene for this questline for now, just the introduction.

– A new hidden object mini game during Ochaco’s new story. This will be the ‘default’ mini game from now on. If you can’t find all the items, or simply don’t want to play the game, wait 20 seconds, a ‘Skip’ button will appear on the top right of the screen.

– Two ATM machines that you can hack for money (cost slicers). One on the main street, and one in the mall. Each machine has a cooldown period of 7 days after being hacked.

– If you’ve done the mall rescue, whether you successes or not, Midnight will contact you on the first night after you loaded up a save file. Meet with her and get her Quirk that allows you to disable an enemy for a turn.

– If you helped Ochaco to keep her job at the store, said store will now sell a better healing item.

– Mei’s contact in the alley will occasionally have grade 2 slicers in his stock, which you will need from now on. He will also very rarely, sell a Double-H-Potion.

– New locations: The public gym, Ochaco’s hallway, and her bathroom.

– Fix the bug where Ochaco and Jiro’s texts were overlapped, softlocking the game. Hopefully I’ve caught all of them now.

– Known issue: Ochaco wears the wrong outfit at a certain point during her story. this will be fixed in the future.

– Talk to Ochaco in front of the school gate to trigger her route.

– Talk to Tsuyu in classroom, choose “Ask about Ochaco”. This will skip time to afternoon.

– Talk to Midnight in classroom. This will skip time to evening.

– Go home. This will trigger a scene where the mc tells you to check with Tsuyu in the morning of the following day.

– Next day, go talk with Tsuyu in classroom. Agree to meet with her after school.

– Afternoon, go to school gate to trigger a scene with Tsuyu.

– Go back inside the school, all the way to the classroom, trigger a scene with Midnight.

– Go back to school gate for another scene with Tsuyu. She asked you to go to the convenient store.

– In the evening (if weekday), or afternoon (if weekend), go to the training ground (The small field next to the school building), and speak to Ochaco there. Train “Gravity” 0/4.

– In the evening (if weekday), or afternoon (if weekend), go to training ground, speak with Ochaco, train Gravity twice (1/4 and 2/4). This, of course, takes 2 days. After the 2/4 where you help her with her own Gravity training, go to the chairs near the far wall of the training ground and let her rest there.

– In the evening (if weekday), or afternoon (if weekend), go to training ground, speak with Ochaco, train Gravity (3/4). After this, go to the chairs near the far wall of the training ground and give her a massage.

– At this point, your Gravity training should be 4/4 and your morning talk with Ochaco is 2/2.

– In the evening (if weekday), or afternoon (if weekend), go to training ground, DON’T speak with Ochaco. Go straight to the chairs near the far wall and choose the option to give her a massage from there. Do this twice (takes 2 days). On the second day, she will agree to let you take her shirt off.

– After the event, go home, in the evening (or the evening of the next day), you will receive a text from her, asking you to meet her at her workplace. If you go to sleep earlier in the day, you WON’T get the text. You won’t miss the event though, just wait until evening in your own room.

– After getting the text, on a weekday, in the afternoon, go to the convenient store, this will trigger a scene with Ochaco and you will have to fight 1 or 2 villains, depending on your choice.

– After the fight, go back home. The mc will remark that he needs to check on Ochaco the following day.

– Go back home. Again, in the evening, you will get another text from Ochaco, same condition as the last text.

– Next day, go to the convenient store when Ochaco is there.

– After that, go to the training ground when Ochaco is there. Talk with her, then go to the chairs. This will trigger another massage scene. Ochaco’s content ends here.

– After the fight, go back home. The mc will remark that he needs to check on Ochaco the following day.

– Next day, in the morning, go to the school building, you will see a scene between Ochaco and Eraserhead. Here, you will have 3 choices, though which one is available depends on your actions throughout the game.

– If you have enough Heroic or Villainy points, you can help Ochaco through the choice highlighted blue or red, depending on your deposition. If you don’t have enough of either, the only choice you can pick here is “There’s nothing I can do.”.

– After this, go home, in the evening, you will get yet another text from Ochaco, same conditions as above.

– Go to the training ground and speak with Ochaco when she’s there, then go to the chairs. This will trigger another massage scene. Ochaco’s content ends here if you managed to help her during her conversation with Eraserhead.

– If you couldn’t help her, or didn’t for some reason, on the following day, you will get a text from Ochaco, saying that she’s been fired from her job at the convenient store. Her content ends here.