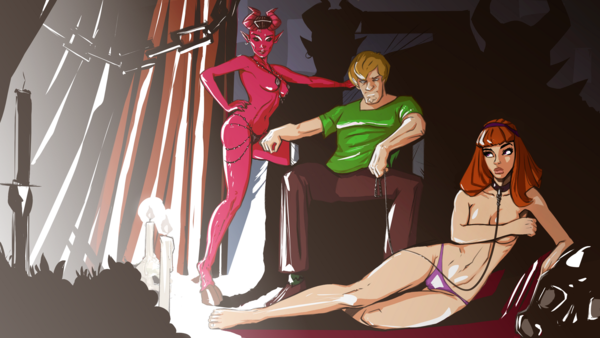 Team Scooby’s latest investigation ends in a complete nightmare!
Left with no money and no place to live, they are forced to stay in an unfamiliar town for an indefinite period of time.
And it seems that this town holds a lot of secrets and mysteries…​

v0.05p
Added chapter 4.
Italian language added to the game.
English has been redacted.
Fixed some minor bugs.
(switching music when approaching the girls room, etc.).
For starters, the prologue has been expanded and a number of map bugs have been fixed…
Completely redone the start screen! Added all sorts of important stuff to it…
The sky and vehicle animations make the map more lively.
Completely redesigned room description script.
Added new location and three new characters, of which two characters are brand new, as well as a redesigned succubus avatar.
Added three new nsfw scenes.
There are a lot of different scenes added in general.
Anyway, now there’s finally an opportunity to earn in the game! This is of course only the rudiments of an in-game economic system, but a start has been made.