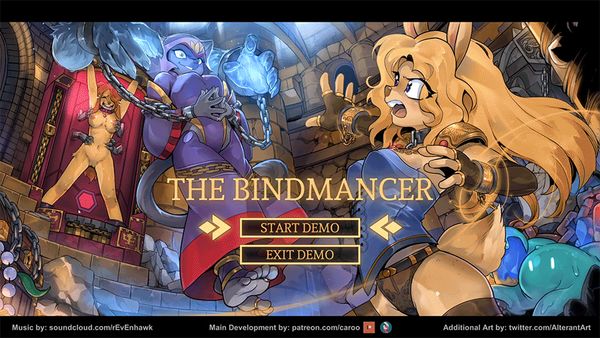 The Bindmancer:
you play as a hero who enters into a ever shifting dungeon of delights in order to save heroes who fell to the traps and dangers that lurk within!​

v2021-10-29
What’s new in this build?
Randomized Dungeon Levels: The layout each time you play the level is different.
Exit Portal Pickups: Allows you to teleport directly to the exit portal, but only once you’ve freed enough prisoners to use the exit portal.

Stamina drain is a bit easier on the player now and doesn’t drain when a beat mistake is made.
Tentacle traps UI doesn’t flash so brightly and obnoxiously now.
Golems now also drop keys and exit portal pickups.
A bunch of smaller bug fixes.

What bugs are known:
Enemies move through each other and the player. We’re working on it.

Sometimes the level generates a dungeon tile on top of another one. If that happens then restart the level.