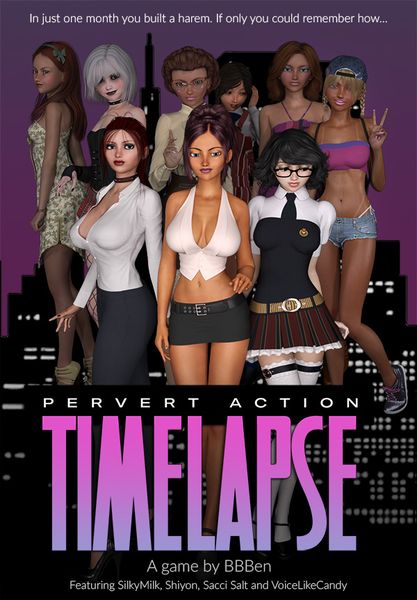 Shuji has lost the last month of his life. Now he finds in that time he’s been dating a group of gorgeous, out-of-his-league girlfriends. What happened in that time? And will he be able to turn a group of jealous ex-girlfriends into a harem? Choose how you build your skills and which women you’ll focus on, as you date the girls in order to unravel the mystery.
This edition, titled “Emi in Focus”, contains Emi’s full dating story. Why would a supermodel date a guy like Shuji? And why is she still hanging around now that she knows he cheated on her? It’s time to find out! (And time to start gathering your harem…)

0.29.1 patch:
Fixed a bug preventing some elements of Mika’s content to properly unlock; most noticable in the jealousy system.

NEW CONTENT
Added Mika’s fourth flashback scene! (Includes 6 new images and 4 new voiced lines.)
Added Mika’s fourth date conversation scene! (Includes 3 new voiced lines.)
Added two new wake up scenes for Mika – when she’s unhappy and when she’s happier. (Includes 2 new images and 2 new voiced lines.) Remember to see wake up scenes you must have “skip scenes” turned off in the stats menu.
Added four new text messages from Mika when she’s feeling jealous that you’re out on a date with someone else! (Features 3 new pictures.) To see these, date someone else while Mika’s jealousy is over 5.
Added two new options on Mika’s conversation menu! “What’s with all the hats?” and “Have you been to the Old Docks?”
Added an option to refuse Hirai outright, in his first appearance. Refusing him removes the “Let x date Hirai” buttons from the apartment, removes him as a topic of conversation with the ladies and prevents his second intro scene from happening.
Added a small explanation of the replay gameplay at the start of a new game.

TECHNICAL UPDATES
Huge possible bug fix, but this needs more testing: the freezes many people experience on loading screens (the “NOW LOADING” bug) may be resolved thanks to me manually replacing & updating the NWJS files the engine exports. I don’t have enough testing from people who experience the bug to confidently say whether this works, but if it does then it is a massive improvement. Let me know if you’re still seeing this bug or if it seems to be fixed now!
This should also get rid of those annoying “profile error” notices you may have got on start up.
Fixed a bug that was causing saves before choices to break by not presenting the choices when you load the game. This bug had been fixed previously, but was reintroduced when an engine update changed things and required some revised script support from Conash, from the Harem Collector team.
Fixed a bug that was not resetting variables on a new game, if you had just been sent back to the title screen from the end of the game.
Fixed a couple of bugs where the message box didn’t show up sometimes; both for the wake up on day 2 and the start of Nobuko’s first flashback.
Fixed a bug that wasn’t erasing the icon on the subway map for Nobuko’s 3rd memory when closed.
Fixed a bug that wasn’t erasing the “End of the line” label when closing the subway map after day 20.

Entering the codes: Go to the entrance room of the apartment (this will only work once you can start navigating around the apartment with the mini-map) and click on the closet that opens a little when you hover over it. A box will pop up and you’ll need to click on the letters to enter them.

NOTE: the codes are case sensitive! So it matters whether or not you use capital letters.