This is a short demo, that will introduce you to the game mechanics.​ 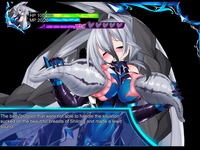 Between Salvation and Abyss [Ch.4 Part 2]